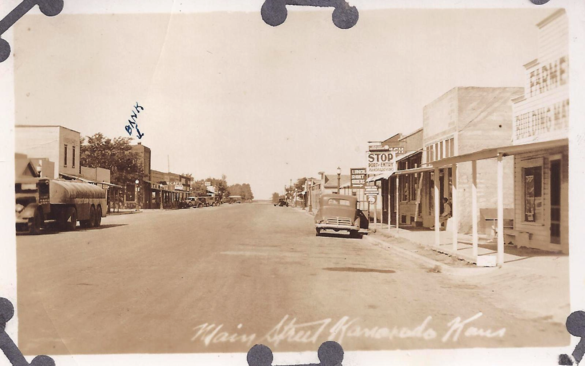 ​     The land for the railroad was deeded on May 17, 1888.   When the railroad came through in 1888 and the "old depot" was built.  But then there was a new one built on Main St. which later closed in early 1970's and there was no longer any train or freight service given to Kanorado. The the lots for Kanorado were deeded on July 5, 1888.

The town was originally called "Lamborn", the name was changed by the Post Office to "Kanorado" on September 9, 1903.

The first houses in town belonged to Wayne Vernon and Addie Craft.  There was also a little brick house built east of the Methodist Church that was built from bricks that was made at the brickyard south of Kanorado.
The first grain elevator was operated by Charlie Rule and was run with a treadmill and horses.
The first car in Kanorado was a High Wheeler owned by Mr. and Mrs. Detwiler, the Briggs soon followed with a High Wheeler of their own.   With new cars coming to Kanorado a Oil Station was opened by the White Eagle Company in about 1913.

Kanorado kept growing until a peak was reached.  Some old-timers claim the peak years were 1918-1926, at that time the population was over 500 people.  During the peak years all the houses were full and several had two or more families living in one house.

During these peak years there were two hotels, three grocery and dry goods stores, five oil companies, two hardware stores, two barber shops, several cafes, one bank, two pool halls, two blacksmith shops, two lumber yards, a telephone exchange, three garages, a campground with cottages, several cream stations, a drug store and doctor, a beauty shop and a dance hall that served as a theater where various kinds of shows were held.  There was a City Orchestra and several good shows were held each year when the Chautauqua came to town each summer and a stock company came in the fall and winter and put on some good plays.  Occasionally picture shows were held.  There was also several grain elevators, a shoe repair shop and a dray line.

In the Fall of 1929 the State Corn Picking contest was held out where the old Winter Airplane Hangar use to be on Hwy. 24